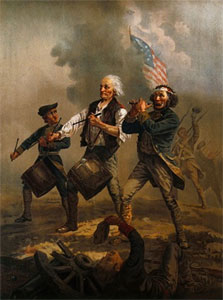 8th [March, 1775.] A Country fellow was detected this day in buying arms from a soldier of the 47th Regt. The men of that Regiment immediately secured him, and having provided the proper materials, they stripped, and then tarred & feathered him, and setting him upon a Truck, in that manner paraded him, in the afternoon, through most parts of the town, to The neck.

This matter was done with the knowledge of the Officers of the regiment, altho they did not appear in it, and it gave great Offence to the people of the town, and was much disapproved of by General Gage.

Arms of all kinds are so much sought after by the Country people, that they use every means of procuring them; and have been successful amongst the Soldiers, several of whom have been induced to dispose of Arms, or such parts of  Arms, as they could come at. Perhaps this transaction may deter the Country fellows from the like practices in future.

The origins of the tune Yankee Doodle are lost to history now, but by the middle of the 18th century the melody was being sung to words ridiculing American colonial soldiers particularly during the French & Indian Wars. Billerica’s Thomas Ditson had a verse attributed to him:

Yankee Doodle came to town,
For to buy a firelock,
We will tar & feather him,
And so we will John Hancock

Of course, Yankee Doodle was soon adopted by the American revolutionary soldiers with words more to the liking of the American patriot many of which are still sung by American school children today.

Tar & feathering accounts go as far back as Richard the Lionhearted and the 3rd Crusade where it is reported that the king ordered any robber traveling with the crusade “shall first be shaved, then boiling pitch shall be poured upon his head, and a cushion of feathers shook over it.”

The are few accounts of this practice in actual use until the American revolutionaries and port mobs revived it. Tar was in ready supply in the port cities and pillows of the day were feather pillows. Although the practice could be sent as a warning by the application of tar & feathers on the victims clothes the fervor of the mob often resulted in painful application to the “tax collector” or other “Tory sympathizers” skin. Occasionally it resulted in death.

By Dick Hawes and Bill Brimer

March 1775 – Animosity between the citizens of Massachusetts and the British forces occupying Boston had steadily escalated since the troops landed in 1768. The growing tension had manifested itself in several incidents both political and social. Some were permanently etched in America’s history and folklore such as the Boston Tea Party and the Boston Massacre. Still others are relatively unknown, like the Thomas Ditson incident.

A young farmer named Thomas Ditson Jr., age 33, who was eager to become a minute man for the town of Billerica, decided to better arm himself for whatever duties lie ahead. On March 7th, leaving his farm and family, he traveled to Boston hoping to find a firelock for sale.

While Ditson inquired of townsmen who had guns for sale, he was directed to a man who “appeared to be a soldier”. Ditson went with the soldier, Sgt. John Clancy of the 47th Regiment of Foot, to a “house” which turned out to be a barracks for members of the 47th.

After entering the house, Ditson bargained for a greatcoat in which he paid a sum of 2 pistareen, a small silver coin used in America at that time. He placed the coat in a bag and began the process of dickering for a firelock.

What happened next largely depends on whose side of the story you believe, Ditson’s or Sergeant Clancey’s. Ditson said he offered four dollars for a, “very fine piece” and would also pay one dollar and a half for an “old rusty piece”. Clancey assured Ditson he would have no problem carrying the firelocks past the sentry at the ferry because they were friends.

Clancy claims he and Ditson began drinking while discussing the firelocks for sale. He said Ditson offered to buy as many firelocks as the sergeant could gather. He went on to state Ditson also made an offer of “any sum of money” if he would desert the army and come with him to the country. At any rate, Ditson was seized by a group of soldiers and carried off to the guard house on Foster’s Wharf at approximately 6 or 7 o’clock that evening.

The next morning, a sergeant appeared and told Ditson to strip to his breeches. More men followed carrying a bucket of tar and a “pillow-bear of feathers.” An officer standing in the doorway ordered the men to tar and feather Ditson from head to toe, including the breeches. A paper was read to Ditson and then hung around his neck, which proclaimed; “American or Democracy exemplified in a villain who attempted to incite one of the soldiers of his Majesty’s 47th Regiment to desert and take up arms with rebels against his King and country”.

Ditson was then ordered to sit upon a chair which had been fastened to a two wheeled donkey cart. About 40 to 50 regulars with muskets and fixed bayonets, led by Lt. Col. Nestbit, pushed Ditson through the streets of Boston all the while jeering and singing insults.

The fife and drums of the 47th played the tune of Yankee Doodle as the soldiers sang an original verse:

Yankee Doodle came to town,
For to buy a firelock,
We will tar and feather him,
And so we will John Hancock.

As a crowd grew and pressed closer to the soldiers, the order was given to load firelock, which was done. Perhaps wanting to avoid another massacre, the officer stopped the procession and told Ditson he was free to go.

In the days following the incident of March 7th and 8th, a letter of protest was written to General Gage by the selectmen of Billerica. Samuel Adams referred to the incident in a letter he wrote: “General Gage has lost command over his officers.”

Thomas Ditson survived the ordeal in good health and joined the minute company in Billerica. A little more than a month later Ditson and other men of the Billerica Minute Men Company answered the alarm of April 19th. One must wonder what was going through Ditson’s mind as he marched towards Concord and then opened fire on the regulars at Meriams Corner. The Billerica Minutemen were also active in the Battle of Bennington, Vermont, at Bunker Hill in Charlestown, MA., and in the Rhode Island Campaign.

Since 1990 the town of Billerica has honored Thomas Ditson with the Yankee Doodle Homecoming. It is held on the third weekend of September. The Billerica Colonial Minute Men re-enact the tar and feathering of Mr. Ditson during the weekend.